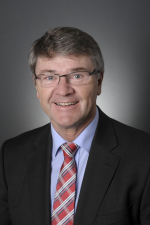 Prof. Dr.-Ing. Heinrich Daembkes studied electrical engineering at the Technical University in Aachen, Germany. After a short period as a young design engineer at Telefunken Radio and TV Systems he took a position at Duisburg University, where he worked on GaAs-based FETs and HEMTs. In 1983 he received his PhD degree on this topic (summa cum laude). Then he started a research career at the AEG Research Centre in Ulm, Germany, working on InP HBT-based optoelectronic receiver ICs, followed by GaAs and SiGe-based technologies and ICs. Until 1996 he was vice president for high frequency electronics at Daimler Research Centre with responsibility for advanced high frequency semiconductor technologies (SiGe, GaAs, InP), optoelectronics, packaging and mm-wave radars. In parallel with this he also became professor at the University of Ulm in 1995.

A year later he became a co-founder and CEO of United Monolithic Semiconductors (UMS), a joint venture between Thales and EADS on GaAs-based MMICs, which he turned into a successful commercial enterprise. Since 2003 he has been with EADS Defence Electronics, where he is presently vice president of system and software engineering. He is also active in several organizations including the IEEE and EuMA and is since 2013 the President of the ARTEMIS Industry Association.