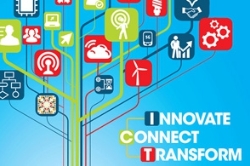 Lots of visability at ICT2015

This year, the ICT2015 event organised by the European Commission was held on October 20 -22, in Lisbon, Portugal. As with former events, also ICT2015 was a real mega event in number of visitors and sessions.

ARTEMIS-IA organised a booth at the exhibition and co-organised several networking sessions. Our target was to show the relevance of the large ARTEMIS Innovation Pilot Projects, now all running for some years and able to show first results. We have been granted a double-size booth on one of the most walked-through lanes in the exhibition. At the ARTEMIS-IA booth the projects Crystal, EMC2 and R5Cop were presented, while Arrowhead had a separate booth next to ours. Although R5Cop is not an AIPP their automated robots moving around the exhibition attracted a lot of attention from several film-crews. Both Crystal and EMC2 had nice and convincing demo’s that made many to spend some time at our booth.

In total three ARTEMIS related networking sessions were organised at ICT2015. The first networking session was organised together with NESSI and BDVA on “Cyber-Physical Big Data Systems” where challenges for the handling of Big Data by CPS systems were discussed. The second session on “The relevance of Large-Scale Pilot Projects on Embedded Digital Technology” presented the need for the AIPP projects, presented by all three project coordinators and introduced by Jan Lohstroh, Secretary General of ARTEMIS-IA. The last session, organised by Arrowhead was on “IoT Automation for Production” on the move towards industrial IoT systems and the impact on automation in the production industry.

We are happy to have welcomed so many of you and that so many new visitors took the time to visit our booth and networking sessions, which made ICT2015 a great event for passing our message on large-scale innovation pilot projects in Embedded Systems and their importance for the future of the European industry.

For an impression of this event go to the ICT 2015 youtube channel or check the images below:

Click on the thumbnail to see a larger version