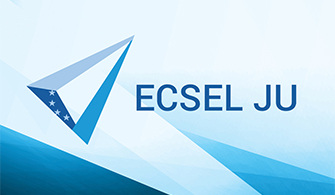 After two successful editions held in Malta and Brussels, ECSEL Joint Undertaking decided to organise its annual event in the spectacular House of Parliament in Bucharest! The Symposium took place under the auspices of the Romanian Presidency of the Council of the European Union.

European and global stakeholders in the Electronic Components and Systems (ECS) field, from Industry, Research and Financial Communities as well as European, National and Regional decision makers and international partners, gathered to discuss and evaluate major developments within the ECS sector in Europe.

One of the main conclusions is that the digital skills gap is widening. The European Commission even predicts 756.000 unfilled jobs in the European ICT sector by 2020, slowing down the Digital Transformation of Europe. Romano Hoofman from Imec stressed that prioritizing research & innovation (R&I) is needed to overcome this challenge.

From all the panel discussions, a common point came out: the crucial role of speed’s level in R&I activities. It essential to agree on a common strategic research agenda; but it is of paramount importance to speed up its implementation. Funding entities need to keep collaborating to set priorities and make sure new ideas are well balanced and executed.

Lars Leger, Chief Technology Officer at NXP stressed that “ECSEL JU keeps EU Electronic Eco-systems at the Forefront of Technology”. His conclusion was based on several pillar points such as Research based on a solid and long term SRA, diverse partnerships by a mixture of large and medium enterprises and creating the momentum in Europe with the possibility to engage in large-scale projects. Furthermore, he stresses ECSEL JU and its partners created a strong unified vision and good alignment via the lighthouse initiatives, and having a mid/long-term vision.

Bert De Colvenaer, Executive Director of ECSEL JU stressed that he was very satisfied with the event’s conclusions which have confirmed the ECSEL JU’s role as the “leading European strategic initiative for focused, coordinated and competitive R&I activities in Key Digital Technologies, and the ECSEL JU Symposium as an important showcase for the important work ongoing”.

The event was indeed an excellent opportunity to gather the ECS community, involve the EU policy makers and other potential stakeholders in the view of the Horizon Europe decision making process. Last but not least, participants had the opportunity to visit ECSEL JU projects at the exhibition and learn more about their scientific and technological achievements, as well as their contributions to the ECSEL JU programme’s targets.