Team up with a powerful network 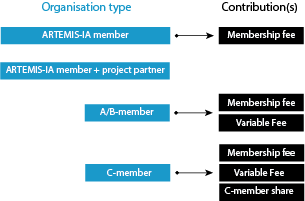 The invoices of the Variable Fee are addressed directly to the representatives of the partners in project consortia. The Variable Fee will only be invoiced after the Grant Agreement has been signed by ECSEL-JU or the European Commission.

More information and a calculation example can be found in Variable Fee details.

The Variable Fee for ECSEL-JU project partners is:

* In line with the new EU Financial Regulations, as of Call 2020, ARTEMIS-IA will no longer accept new Declaration of Acceptances (DoA) for ECSEL projects. However, for ECSEL projects up to and including the 2019 Calls, participants can sign an ECSEL DoA.

Please be aware that the contribution fee of non-members in an ECSEL-JU project is to be covered by the ARTEMIS Industry Association C-members in the project, as defined in the Articles of Association (AoA) and the Bylaws. To ensure that the contribution is borne fairly by all partners, we encourage you to ensure that all non-member partners in your project become a member.

All C-members of ARTEMIS Industry Association have agreed to pay an extra variable contribution to compensate for non-contributing non-members participating in the same ECSEL-JU projects as they are. Such project participants are also known as ‘Free Riders’ (not a member of ARTEMIS Industry Association and not having signed a Declaration of Acceptance). The extra variable contribution is called the ‘C-member Share’. The C-member Share is invoiced annually and is based on the situation in the project in December before the year of the invoice.